Last week as we began worship, I took a few minutes to speak to the horrors of the white

supremacist rally and counter-demonstrations that took place in Charlottesville, Virginia that weekend.  The news and the shock many people were feeling was still so very raw. I promised that while our worship was not changing in light of the events that had been taking place over the last 36 hours or so, we would be revisiting it in the weeks and months to come. We are this morning, and we have to continue to as we move forward.

Sometimes we will address these topics in study groups and intentional conversations. The Adult Ministries Committee has already put a discussion of the book

Waking Up White, a book some of you read with the church a year ago, on our education schedule for this year.  I will be more than happy to help other people find and form additional groups for this book and for other opportunities for growth that haven’t already been scheduled.  This is important work. This is crucial work. This is vital work that needs to be done. Racism is a sin. White supremacy is a sin. Ignoring it in our society and in our own lives is a sin. This is a spiritual matter.

This week I didn’t have to dig around to find a Bible passage that speaks to what is going on in our world. The readings we heard this morning are readings being read in countless Christian churches across traditions and around the globe because they are readings suggested to us by the Revised Common Lectionary, a calendar of readings commended to the Church universal by an ecumenical body. They seem to speak directly to us, though, because the things we are wrestling with in our society right now – speech that is foul and harmful in contrast to speech that is pure, the cries of those who are in pain and crying out for mercy and justice, who is inside and who is outside our community of compassion – are things that are all over the Bible. These are concerns that get to the very core of what it means to be people of God and disciples of Jesus. May all of us have ears to hear.

At the start of this morning’s gospel lesson Jesus is speaking to a gathering of people in Galilee, a gathering that includes not just the hopeful crowds of people who have heard about his ability to heal their ailments, walk on water, and offer a good word of hope, but also a contingent of scribes and Pharisees who have come up from Jerusalem to see just what he is up to.  Maybe they were summoned by Jesus’ own hometown synagogue from which he was recently rejected. “Prophets are not without honor except in their own country and in their own house.” Maybe they came of their own accord, having heard of the stir Jesus was causing with his teaching and touch. Whatever their reason, they came with the intent to test Jesus’ knowledge of the law and faithfulness to the tradition, asking him about how he and his disciples adhere to the commandments and codes.

Jesus answers the questioners more publicly than they asked, calling a crowd to hear his interpretation of the laws governing handwashing and other purity codes. People are not made clean or unclean by the rituals they follow, he says, but by the attitudes of their hearts that lead to the actions of their lives. The body naturally takes care of impurity that is ingested, but the impurity that we need to be concerned about is the impurity that comes from inside ourselves and is manifest in the way we treat others as disposable, with little respect, even as less than human.

Finishing this interaction, Jesus leaves Galilee and goes to the district of Tyre and Sidon, 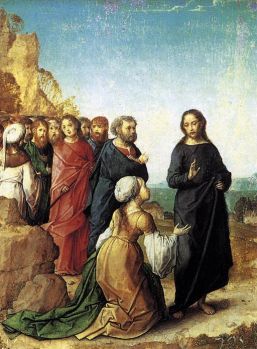 Anyone who has ever cared for a loved one who is sick, especially with a long-term, sickness, addiction, or mental illness, knows why this woman is shouting. She is tired.  She is scared. She is hurting. She is broken. She is angry. She is grieving what has already been lost and what could still be lost further. She has been trying again and again to seek healing and wholeness for the one she loves and doors have been shut in her face, phones have been hung up without answers, specialists have passed her around from office to office, and no one anywhere seems to care. She has tried to be polite.  She has tried to explain. She has given every ounce of calm she has to try to get somewhere, and it has led nowhere. She doesn’t have any calm left. Yes, she is shouting. She’s shouting because no one is listening.

In the aftermath of the rallies and counter-demonstrations that turned deadly last weekend in Charlottesville I have seen and heard and been one of countless people asking the question, “How did we get here? Weren’t we passed all this?” I have read editorials and articles, blogs, Tweets, and Facebook posts all talking about what is going on, but I have to say it is only the

white writers, tweeters, and wonderers who are asking these specific questions.

Only those who have the privilege of ignoring the state of racial tensions in this country are surprised by what is going on. Myself included. I knew it was bad. Or I thought I knew it was bad, but I didn’t know it was this bad because I don’t have to know how bad it is to make it through my day alive.

I have the privilege of not needing to use the website of the Southern Poverty Law Center to check out the location of identified hate groups before I chose which house to buy in which neighborhood in which city of the Fox Valley. Unlike the Stated Clerk of our denomination, a black minister in the Presbyterian Church (USA) who I was with several weeks ago at Synod School, I have the ability to go out for McDonalds’ French Fries at dusk in a small town in Iowa without getting pulled over by a police officer and a backup car, who had no reason to write a citation. And I can walk through parks in any city in this country and most others without having to look at statues of men who led armies to keep my ancestors enslaved.  I thought I knew it was bad, but in reality I haven’t been listening well enough to those who have been shouting something different, “Have mercy on me!!!”

Have mercy on me.

As one woman shared overhearing in a coffee shop: 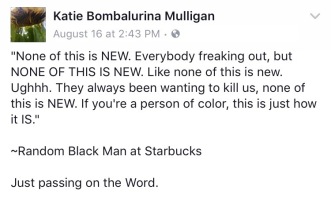 But this isn’t how it’s supposed to be. This inequality, this division, this hatred, this racism, this white supremacy, this dehumanization isn’t what God intends for humankind. People are shouting about it. Black people have been shouting about it for decades even when it has fallen on deaf ears. Those who have been relegated to the margins in education, housing, and the job market have been saying it for longer than we’ve bothered to listen because we feel threatened by what we might have to change if we do.

In our gospel lesson it’s the Canaanite woman who understands God’s intention most clearly. It’s the woman, one who in her culture, is dismissed as not as important as a man… it’s the Canaanite, from a group Jesus and his followers would consider unclean and unworthy, who understands that God’s grace is abundant. God’s mercy is never-ending. God’s love and concern extends beyond the bounds of the privileged classes. God’s healing and wholeness is big enough to include all people.  It’s the Canaanite woman whose persistence in demanding that things be set right who is called faithful by Jesus.

But she is faithfully persistent, proving to even Jesus that she is worthy of God’s grace that overflows beyond expectations. 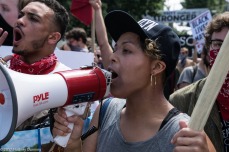 to get rid of her. They try to get Jesus to send her away because she is unworthy, insignificant, and a waste of their time… because she keeps shouting her truth, demanding her justice, crying out for her daughter’s life, and they are privileged enough to find her shouting, demanding, and crying out annoying. But she is faithfully persistent, proving even to Jesus that she is worth of God’s grace that overflows beyond expectations.  Pure words trusting in God’s abundance and mercy come from her mouth. Defiling words of disregard come from theirs.

So this is the point in some sermons where it takes the turn toward “good news,” right? Much of the time that good news sends us out with comfort for the week ahead and makes us feel good. Other times, though, the good news comes as a challenge to live more faithfully, and it might leave us uncomfortable. Sometimes the good news is actually really hard news in many ways. This is one of those days.

The good news is that Jesus doesn’t give up on us when we mess up over and over, in intentional and unintentional ways, by turning a blind eye or by staring heartlessly, with our sins of omission and our sins of commission, with our personal sin and our participation in systemic sin. Jesus doesn’t give up on us, but instead brings us over and over to be confronted by our sinfulness because he refuses to abandon us in our imperfections.

He walks us right into situations that feel foreign, that challenge our privilege, that demand us to open our eyes and our ears and our minds and our hearts to listen to the people who are crying out for a new reality. The good news is that Jesus isn’t satisfied with our words or attitudes or spirits that defile, but Jesus brings us right into relationships and experiences where we will be challenged to learn to do and be better than we would on our own.

Friends, let’s open our ears to listen to those whose experience of reality, of daily life, is vastly different than our own, even when listening convicts us. Let’s open our eyes to see what is happening around us in our community, in our nation, and around the world.  And let us open our lives to the transformation that comes when what flows from our heart reflects God’s mercy for all people.