I started a new call at Fox Valley Presbyterian Church this morning.

A bit of reflection on that is coming in the next couple of days, but for now I wanted to try to post my sermon with audio.  We don’t have a podcast (yet!), so I wanted to try this out today.  I recorded straight from my phone and loaded it up here.  I hope it works!

I wonder if, even as a kid, Jesus was the kind of person who just invited himself over to a friend’s house. I am always struck by the part of this story where he just announces to Zacchaeus, as the children’s song goes, “For I’m going to your house today.” This story makes me wonder if, even as a kid, Jesus would finish sweeping up the sawdust and picking up the scraps of wood left around Joseph’s work bench, and then shout to Mary on his way out the door, “Mom, I’m going over to Josiah’s house to play!”

Because in my house growing up, and now in my house today with my own kids, that would most likely be met with, “Oh really, Jesus? You think so?  Did he invite you?  Do his parents know? Are they going to be there?  Don’t you dare try to make plans to stay for dinner if they don’t ask you first!”  While we didn’t have a hard and fast rule that preventing us from casually knocking on the doors of friends’ houses to look for playmates, I do still carry a sort of uncertainty or nervousness about just how appropriate it is to invite myself over to visit someone.

But this isn’t one Jesus’ hang-ups.  He has no problem at all announcing his intention to join Zacchaeus, a curious bystander and a man with a questionable reputation among his peers, at his house. We know a little, but not a lot about Zacchaeus as this story begins.  We know he is the chief tax collector and that he is rich.  We can assume fairly safely that he became rich because he was a tax collector.  A common practice in that day was for tax collectors to charge some extra for their own benefit as they worked on behalf of the state.

The Scripture also says that he is ‘short in stature,” but that could be a comment less 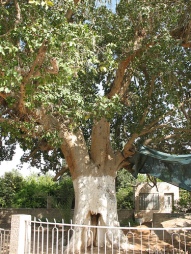 on his height and more on the way he is diminished in the sight of the community. An status confirmed by the grumbling that goes on when Jesus announces his dinner plans for the evening.  The crowds are quick to judge and less than supportive of the idea that Jesus would go to be the guest of one who is so clearly a “sinner” in their eyes.

I wonder how Zacchaeus felt about the unexpected intrusion of a guest.  While the ancient culture was more comfortable with the idea of offering sudden hospitality, having someone declare they will stay with you is a different thing.  Zacchaeus was certainly interested in what was going on when Jesus came to town, but I doubt he expected to end up with Jesus at his dinner table.  In fact, Luke makes it sound like, if anything, he a bit of a skeptic trying to figure out just who this Jesus is, what he’s all about, why the crowd has gathered for this man from out of town. He was just there because he was curious, but now all of a sudden, the object of his curiosity is about to be his house guest.

Are things in order back home?  Is the laundry still in the middle of the dining room?  Did the morning dishes get washed and put away? Is there anything in the refrigerator to feed a guest? This was not how the day was supposed to go. It’s a bit of an intrusion on the plans that were made.

I’ll admit this image of an intrusive Jesus makes me a little uncomfortable. Like many others I’ve been conditioned to imagine my Jesus a little softer, a little meeker, a little more like the classic pictures with the soft golden brown curls and the crystal clear blue eyes. This Jesus stands quietly at the door and knocks.  He waits politely for the host to answer and invite him in.

Jesus who invites himself over is harder control.  He might want to show up when I’m not ready.  He might want to come in when my house is a mess, when my spirit is out of sorts, when I know that I don’t measure up. And speaking of not measuring up, this intrusive Jesus doesn’t seem to understand how things work down here.  There’s a pecking order, is there not?  There are people who deserve blessing and people who don’t, am I right?  Some people ask for their trouble.  Some people don’t work hard enough, don’t live clean enough, don’t pray well enough, so those people, those sinners, as the crowd in Jericho grumbled, those people don’t deserve a visit from Jesus.

Yet Jesus, and the one who sent him — Jesus, and the Spirit that blessed him at his baptism — Jesus has a habit of moving in unpredictable, uninvited ways.  Jesus is awfully hard to control and has been across the ages.

Today’s designation as “Reformation Sunday” marks an intrusion of another sort, one we look back on and consider to be led by the Holy Spirit.  Four hundred ninety-nine years ago tomorrow, Martin Luther delivered his ninety-five theses, or objections to

the practices and theology of the church, to religious authorities.  He was not alone in his objections nor was this the first time he voiced them.  He had been preaching for several years against the practice of selling indulgences, essentially “get out of purgatory free” cards sold to the faithful concerned about the eternal condition of their loved ones who had died.  But the communication of his collected thoughts and arguments against this practice in such a definitive, and I’ll say intrusive way, is often considered the tipping point in the Protestant reformation.

Our own theological heritage includes a story of intrusion, too.  John Calvin, the father our branch of the Reformation, was a lawyer living and working in France. When his

writing and opinions challenging the beliefs of the church began to circulate about
twenty years after Luther’s, he had to flee from France to avoid persecution. Calvin was then invited to Geneva by another reformer of like mind, but once he got there, and once he started to institute a number of changes to the church, his intrusion into the local practices wasn’t quite as welcome as he first thought.  Eventually, he was run out of Geneva, too, when his changes went further than some local leaders could handle, when they were seen as intrusive and too disruptive.

Looking back, as we do on a Reformation Sunday like today, despite all the bumps in the road and the challenges along the way we still see not just the intrusion of a few strong leaders, but actually the intrusion of the Holy Spirit in the church through the Reformation.  And not only were Protestant churches born through this movement, but the Catholic church itself, the church against which the reformers were pushing, ultimately experienced an internal reformation of its own. As we read back over history, we are bold to say, that Jesus showed up, invited himself in, and the church was transformed.

When the Spirit is up to something, when Jesus comes to those who need him, it’s not always expected, but it’s always life-changing. We often hear in this story of Zacchaeus a story of repentance and conversion.  It fits a formulaic understanding of the journey of faith that became popular, particularly among Protestants in the United States in the last couple of centuries.  Sinner sins greatly.  Jesus invites repentance.  Sinner repents and makes some life change to prove it.  Jesus forgives and offers salvation.  As we usually read this passage the words of some future change are put on Zacchaeus’ lips, “I will give to the poor…. I will give back….”

But another reading is actually possible, a reading where these actions aren’t actions for the future, but things Zacchaeus is already doing.  “I give to the poor…. I give back….” In this reading Jesus doesn’t save Zacchaeus because he changed his way.  Instead Jesus sought out, came to, and saved a person who was much more complex than a traditional reading implies.  Zacchaeus is neither all bad, nor all good.  Zacchaeus, in fact, is a lot more like most of the people I know – people who try day by day to navigate life and faith, people who get it right sometimes, get it wrong others, and wonder a whole lot of the time who this Jesus is and what he’s going to do with us.

Well, here’s what he did for Zacchaeus, and what I think he does with us. Jesus invited himself in.  He didn’t wait for Zacchaeus to get his whole life in order.  He didn’t wait for Zacchaeus to get the courage to ask him over for dinner.  He intruded; he blessedly intruded, into Zacchaeus’ life, as he blessedly intrudes in ours.  When we least expect it; when we aren’t really asking for it. Maybe even when we don’t even want it – Jesus bursts through the door and blesses us.  He doesn’t wait for an invitation, and he certainly isn’t bound by our understanding of worth.

Because what people see as a sinner – Jesus sees as a child of Abraham.

What the world sees as hopeless – Jesus sees as potential.

Those who others choose to hate, mock, fear – Jesus invites to the table and blesses with salvation.

And that salvation changes everything.

One of the catch phrases that has been given to us by the Reformation is “Reformed and always being reformed.” It works for churches and traditions, and it works for our lives.  It is God who seeks us out and changes us according to the will and word of God.  It is God who makes new life possible.  It is God who is working in our individual lives and our life together to continually save us from ourselves and name us as children of the covenant.  We don’t save ourselves.

Keep watch, as Habakkuk has said.  Keep watch to see what Jesus will say.  Keep watch for his blessed intrusion, for there is a vision for this appointed time.  It will surely come, and we will be transformed.