and emotions drive the way we behave in our relationships.  Love is certainly one of them.  But so are worry and fear and sadness.  Desire and joy and delight.  Companionship and concern and compassion.  Jealousy.  Oh, jealousy is a tough one.  Most of our relationships are held together by an intricate web of any number of feelings, and since feelings themselves can get quite messy, relationships are almost always the same.

The relationship between Paul and the church in Corinth, we have noted as we have looked at First and Second Corinthians, is no exception.  We heard in this morning’s reading that there has been some damage to the relationship between the founder of the congregation and the congregation itself.  If we piece together clues from around the letter, it seems as if on an earlier visit one member of the community challenged Paul or spoke against him, or insulted him and hurt him in some way.  Paul looked to the community for their support and maybe even intervention, but he did not receive it.  He left Corinth in great pain and sorrow – first for having been attacked by one member, and then for the lack of support he received from the rest. 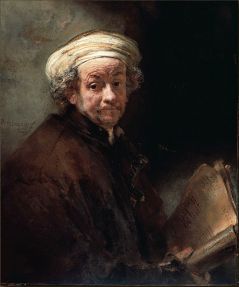 Self-portrait as the apostle Paul (Rembrandt)

He referenced in today’s reading a letter of tears that he sent back to the church telling his story.  He had resisted the urge to go back for another visit that would like have been painful for both him and the community.  Instead he made himself vulnerable in writing and putting forth with honesty how he had experienced distress and anguish of heart because of their treatment.  It was a letter that apparently moved the church in Corinth to change their course of action, but now Paul is writing again because they may have let the pendulum swing too far in the other direction.

The Corinthian church has taken action against the offending individual and punished him, maybe even banished him from the community.  They finally really heard and understood the pain that was caused to Paul, and in reaction they decided to return that pain and isolation on the offender.  An eye for an eye, as they say.

Paul calls for a different way of dealing with one who has offended not just him, but the whole community with his actions.  He calls for the church to show forgiveness and offer consolation, to reaffirm their love for the individual and restore the relationship that has been broken.

Two years ago Archbishop Desmond Tutu and his daughter, the Rev. Mpho Tutu, wrote a book on forgiveness entitled The Book of Forgiving: The Fourfold Path for Healing Ourselves and Our World.  Archbishop Tutu, you may remember, is a South African social rights activist.  His ministry of justice was a crucial part of the opposition of apartheid, and when it finally fell Tutu headed the Truth and Reconciliation Commission that sought restorative justice for the victims of the gross human rights violations that occurred in this horrendous period of history.

Paul has done this in his letter of tears that has been lost to history.  He has been honest with the Corinthians about what he has experienced by their treatment.  He has shared both in that letter and reiterated in this one the deep pain he has experienced.

Once the truth of what has happened has been revealed and the hurt has been named, then those who have been wounded can grant forgiveness.  They can choose to tear down the wall that divides them from what has hurt them.  It is difficult soul-bearing work.  But it is work that is crucial for healing and wholeness.

A couple of months ago CBS News aired the following “On the Road” segment that walks through an experience of forgiveness that led to restoration in an unlikely relationship.

Really?  What is our excuse? I mentioned last week that none of us are immune to the realities of grief and pain.  None of us will escape this world without having lost a loved one, a friend, a dream, or an ability. And similarly none of us, I imagine, will move through life without hurting or having been hurt in our relationships.  It’s simply a part of the brokenness of human life.  At some point (or, more likely, points) our actions, attitudes, or words will cause another person pain, and the flipside is also true; someone will cause pain to us.  What will we do then?  How will we handle the pain, the anger, and the strain on our relationship? What is our excuse for holding onto pain?

We are often tempted to just ignore the work of forgiveness because it is hard.  It requires vulnerability and honest speech.  It carries us back to the pain that was inflicted when we think we might be better served by just burying it, ignoring it, and leaving it in the past.  But untreated pain leads to inflammation.  Wounds that are not dressed fester and become infected.

As distressed as Paul was by the way he was treated first by one individual and then by the community, he seems just as distressed by response of the church, and so he calls them to the work of forgiveness.  He calls them to heal with love.

Photo of Archbishop Desmond Tutu and the Rev. Mpho Tutu by Apdency (Own work) [CC0], via Wikimedia Commons