The end is near!  I imagine most of us, either in person or on TV or in the print media, have 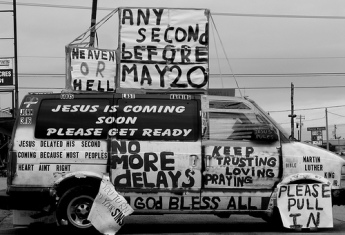 seen someone like the person who probably drives this van.  He or she is usually around at events or occasions that draw a big crowd.  They don’t even have to be religious events, although I’ve seen people like this warning us “apostate” Presbyterians at our General Assemblies in the past.  But I’ve also seen and imagine you have, too, these poster waving, self-identified prophets declaring “The end is near!” at football games and festivals.  It may even be just what they call “Tuesday” in popular tourist spots like Times Square or the Washington DC Mall of monuments in the busy summer season.  These prophets (I use the term loosely, very loosely) may turn up anywhere there are a lot of people around because they are trying to announce what they think is a very urgent message – “The end is near!!!” Judgement is coming!  You better get your stuff in order, because this is your last chance.

These are the kinds of things we think of when we hear apocalyptic literature, like chapter 13 in Mark’s gospel- the stories and poetry, visions and prophecies that tell of the time when the world will turn, when what we know will pass away and something new and unfamiliar will emerge.  It’s an abstract sort of literature and we long for it to be made concrete. We wonder if this is literal or figurative.  We wonder if there are hidden meanings or if these are meant to put everything in plain view.  What if I’m the only one who just doesn’t get it?

Lutheran biblical preaching scholar and seminary president, David Lose, teaches about apocalyptic literature, the kind we heard from Mark today, in this way:

“In a nutshell, apocalyptic literature stems from a worldview that believes that everything happening on earth represents and correlates with a larger, heavenly struggle between good and evil. It therefore reads into earthly events cosmic significance and anticipates future events on earth in light of the coming battle between the forces of God and the devil. Hence, it often tries to make sense of current events and experiences by casting them in a larger, cosmic framework and in this way give comfort to people who are currently suffering or being oppressed.”[1]

A popular way to read apocalyptic texts has been to mash this cosmic view with a desire to find the signs of its fulfillment in our present day current events. To match up an ancient, metaphorical description of historical and spiritual events with real live, current events in the time of the reader. When this happens some will try to predict, reading “the signs of the times,” the end of the world as we know it and the promised return of Christ as imminent.

We see this again and again in each generation. In fact, popular readings of apocalyptic passages have led to Jesus racking up a series of missed appointments on earth.[2]

Why do people try to do this?  Why do they try to predict how “the end” will all unfold?  And why do some of us, many apparently, enough to keep the predictors in business, seek their predictions?

For some I think there is an element of escapism – – of looking for and anticipating the release valve on all the pressure that builds up in this life.  The disciples might be asking for this reason.  They have felt the anger toward Jesus rising.  They have seen him tossed out of his hometown and tested by religious authorities.  They have tried, unsuccessfully at times, to figure out where they fit.  They have heard in his voice frustration when they have asked all the wrong questions at all the wrong times – – Can we sit in the place of honor with you?  Which of us will be first?  Who is the most important?  Now they’re asking, when will all of this reach a tipping point?  When will the steam be released and things get better, or at least go back to the way they were?  When will we know that the end is finally near?

Others seem to want to know so they can get the house in shape just in time.  It’s like when I was little and Mom left a list of chores to accomplish while she was gone for a few hours.  Did I start when she left and work the list one by one to make sure all was ready before I played or watched TV or talked with my friends?  No way!  I did all those things first, then rushed around 15 minutes before she got home trying to get it all in order.  Or it’s like that darn snooze button on my alarm clock.  I can’t resist pressing it over and over for just 9 more minutes, 18, 27 minutes of sleep before I absolutely have to be awake to maybe get out the door in time.

This way of thinking about the “end times,” this way of thinking about how we might live in relationship with God, it’s a pretty privileged way of living.  It’s a luxurious way of imagining how God works because it can only be enjoyed by those who are untouched by wars and rumors of wars, people who are comfortable in their homes, and who don’t have to worry, really worry about whether there will be a job or a pension check tomorrow.  People who don’t have to depend on the kindness and compassion of others to make their living can hit the snooze button one more time, can live without wondering a whole lot about when it all might come crashing down. Or them, one final warning right before the end really can sound like enough.

Maybe this is why apocalypse is so strange to our ears.  Most of us don’t feel the need to be so awake; we aren’t feeling threatened.  For the most part, the lives we live and the people we know aren’t just barely hanging on wondering when peace and certainty will come.  We are, for the most part, able to sleep very soundly at night.  So the words of warning about wars and violence, persecution and destruction, earthquakes, famines, and falling starts, can be terrifying for those of us who, by and large, escape this kind of tragedy in our lives. Maybe this is why apocalypse can sound scary, why we look to countdowns to tell us when the signs are really here, why we want to know exactly when it will take place.   Maybe this is why we don’t have to look for apocalyptic literature to find comfort and the promise that someday it will all be upended.  That’s actually a threat to the society which is working pretty well for us.

But for some the apocalypse sounds less predictive and more descriptive.  For those who are actually fighting the wars and preparing for the rumors of wars, this turmoil isn’t something far off in the distance.  For those who depend on the offerings at the temple for their daily bread, the crumbling institution means they may not eat tomorrow.  The sun is not shining in the middle of their days.  The moon doesn’t give off its light.  Everything that is supposed to be up is coming down. The world is turning upside down.

They are living in these “end times” as we call them, every single day.  For them the end is near because it is always here; it is their reality.  It is their day-to-day experience. And for them there is a word of hope in apocalypse.  God is not only coming someday; God sees and anticipates what is happening.  In fact, in Jesus of Nazareth God chose to enter these days and live this kind of life. Jesus came to experience all that human life entails, even death, violent death, painful death. In the person of Jesus God will die and nothing will be as it is supposed to be.  The powers of heaven will not only be shaken, they will be stripped as God hangs on a cross.

But, Jesus says, “Don’t panic. Do not be alarmed.” These uncertainties, these discomforts, these sources of stress and worry and anxieties, these pains, they are the start of something new.  These disruptions are the changes going on in the body of the creator that will allow new life to come forth.

“Open your eyes,” Jesus says.  Wake up! Look for the places and the people where there is suffering, where the world is turning them upside down.  Watch for how you are contributing to their anxiety and do something to change it.  Not to quickly get the house in order and save ourselves. Not, as the bumper sticker says, to look busy because Jesus is coming, but to be a part of the new thing God is doing, to be a part of the new life that is coming, to joyfully join resurrection living.

The caution that the end is near, that God is always on the verge of doing something new, of setting wrong things right, means the life of discipleship is never more important than now – the life of peace, not terror; the life of humility, welcome, and the common good; the life in which we demonstrate our love of God through our love of others.

The caution that the end is near invites us into a posture of watchful waiting, not waiting in fear, terrorized by what might come, but waiting in joyful anticipation of what God is doing in the new day.

Watchful like a child who runs to the window every 5 minutes when she knows Grandma
will arrive any minute.

Watchful like one standing on the baggage claim side of the “arrivals” checkpoint, standing on tippy toes to see his beloved coming through the parting doors.

Watchful not in fear of punishment, but hopeful for the promised birth of a new day.