Romans is Paul’s longest letter.  He has a LOT to tell the church in Rome.  Either they have a lot of questions or he has heard a lot of, shall we say, interesting versions of theology coming from the community.  Whatever it is he has a lot to say to them.

Some of the things he says are the basics, spelled out simply, but also beautifully.  We heard last week, “But God proves his love for us in that while we still were sinners Christ died for us.” (5:8)  Other things, like the things we will hear today are teachings that take it to the next level. 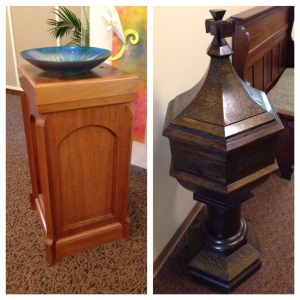 I imagine this week’s reading as a sort of answer to an unspoken question – – only I imagine it spoken.  I have heard it spoken – in conversations with confirmation students year after year, in Bible studies with women around that library table back there, in coffee shops and airplane seats when someone with some bones to pick with the church finds out what it is I do.  The question is this, see if you’ve ever asked it, “So if Jesus goes to such great lengths to save us, if God loves us so much that God’s going to forgive any sin we have anyway, why not just keep on living the fun life?  Why bother to be good anyway?  We’ll get forgiveness for our sins anyway, won’t we?”

Well, that’s what Paul answers in today’s reading.  Let’s listen to what he has to say:

Paul takes his answer to that age old question, “Why bother to be good?” back to baptism – – the rite by which we enter the church, the body of Christ, the gathered and marked communion of saints who are called to live in the Way of Jesus.  Baptism is chock full of rich symbolism.  Washing, cleansing, nourishing, birthing, creating, destroying, as we heard from Paul, death, and new life.  There are symbols in the way we build fonts, where we place them, how we use them.

Take our font here in our sanctuary for example.  Some of you that have only been here for a couple of years probably have never seen it, but somewhere there is a cover on the font that rotated open to reveal the sunken bowl that held the water.  The octagonal cover is beautiful, and its eight side represent the eighth day, the first day of a new week, the day of the new creation, of resurrection.  However, the symbolism couldn’t be seen from the congregation’s point of view anyway, and another symbolism, that the water is covered, inaccessible didn’t feel right either.  We replaced the cover and the sunken metal bowl with a more visible glass bowl that reminds of us of God’s available, abundant grace in in baptism.

An older font from this church’s history is found in the hallway near one of our classrooms.  This font is hexagonal. The six faces are a reminder of the six days of creation.  Baptism is a sign of the new creation of life in Christ. They are also a symbol of the sixth day of the week, Friday, specifically Good Friday, the day of Christ’s death.  If, as we just heard Paul say, we are baptized into the death of Christ, Good Friday holds great meaning in our understanding of baptism.

The oldest known baptismal font that still exists is a 3rd century font that was located in a house church in Syria.  It is shaped like a coffin.  Can you imagine this modern day font in our church sanctuary? 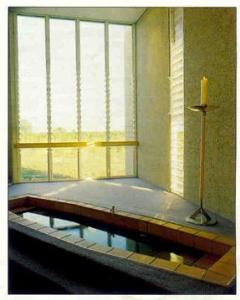 I can’t think of any more striking symbol of dying with Christ in a death like his, of being buried in a tomb with him, only to also rise to new life and come out of the grave in his resurrection than a baptism that takes place in a coffin.

In his book for parents who are preparing for the baptism of their infants, John Westerhoff, an Episcopal priest and expert in the spiritual lives of children, tells the following story about an infant baptism he witnessed in a small parish church outside Buenos Aires, Argentina.

As I walked in, a bit late, I witnessed a congregation on its knees singing a Good Friday hymn.

Down the aisle came a father carrying a handmade child’s coffin.  His wife carried a pail of water from the family well.  Behind them came the godparents carrying a naked baby [wrapped in a blanket.] With tears in his eyes the father put the coffin on the altar, the mother poured in the water, and the godparents handed the child over to the priest.

As the priest asked the parents and godparents the required questions, he put the oil used in the last rites of the church on the child’s skin.  He took the baby and, holding its nose, immersed the child in the coffin with the words, “You are drowned in the name of the Father and the Son and the Holy Spirit.” As he raise the child out of the water the child cried out as he probably had when he emerged from his mother’s womb at his first birth.

The priest held up the child and exclaimed, “And you are resurrected that you might love and serve the Lord.”  The congregation leaped up and began to sing an Easter hymn.  The priest poured a perfumed oil over the child and as he signed the baby with the cross said, “I now brand you, as we do cattle on the range, with the sign of the cross, so that the world will always know and you will never be able to deny to whom you belong.”  The congregation broke into applause and came forward to offer the child the kiss of peace with the words, “Welcome, Juan Carlos Christiana.”  No longer was the child to be known as Juan Carlos Renosa.  He had been adopted by and brought to new life in a new family, the family called Christ.[1]

Baptism, while we often singularly focus on the celebration of life, new creation, and welcome, is actually nothing without death.  It’s a life and death decision…. But not in the way you may think.  Even in this age when cultural assumptions about church involvement no longer rule the day, even in this age when it isn’t expected that every household belong to a church whether they believe in the God of that church or not, people still inquire about baptism all the time.  Some do it because it’s family tradition, and it seems easier to make grandpa happy than to argue about the meaning of it all.  Some do it because it just seems like something you’re supposed to do.  Still others do it because, whether or not they practice they rest of the faith, they have this idea that baptism will save their babies from illness or injury in this life, and torment and damnation in the next.  It’s a “baptism as insurance policy” mentality.  It feels like a life or death decision, like they are choosing life over death.

And again, I said baptism is a life and death decision, but not at all in this way.  Instead Paul tells us, baptism is a sign of the decision God made in Jesus – – a decision of life over death, of life after death, of life through death.  And all of this, remember, is an answer to that age old question, “If God is going to forgive me anyway aren’t I just fine dwelling in a life of sin?”

Well, in short, no!  Because of baptism, because of God’s grace, because of the resurrection of Jesus to new life, to life beyond the death that came into creation because of our separation from God, we aren’t stuck swimming in the water of sin, we aren’t destined to breathe that air, we aren’t enslaved to and entrapped by the bars and handcuffs that hold us back and keep us away from God.

Actress Molly Ringwald told a story she heard about the changing landscape of zoos in the middle to end of the last century.  If you’ve been to Como Zoo you have seen this yourself – – the vestiges of the old ways of displaying animals, in small confined cages, still stand just down the walk from the new more natural habitats outside of the primate house.  When animals were first moved from their cramped, confined cement floored and metal barred cages, some had never seen the natural earth.  Some had never felt grass under their feet, the wind on their faces, the freedom of endless sky overhead.  They stayed in their cages rather than move into their new, freer enclosures. This is what choosing death over life, choosing sin over grace is like for the people

But we are no longer captive.  We have no good reason to stay in this cage, stay confined to this space, behind these bars, because the bars have been removed.  We are not chained and bound to live this death-filled life because Christ died to sin, and Christ was raised to new life.  And Christ brought us with him.  The question shouldn’t be “Can I just go on sinning?  Can I just live without regard for God and God’s grace in my life?”  The question should be “Why would I bother?”

Preachers like to tell a story about what may have happened when the Russian Czar, Ivan the Terrible agreed to be baptized in order to marry the daughter of the King of Greece. Wanting to prove their loyalty to their czar, his army wanted to be baptized as well. But there was a problem. Church membership was prohibited to professional soldiers. How could the men conform to the demands of the church and still be free to fight for the czar? Simple. The 500 soldiers marched into the Mediterranean Sea and were baptized with their swords and their fighting arms sticking out of the water.[2]

Why bother?  Why try to go into this new life with Christ without going all in?  We all try at some point or another.  We try to hold some part of our life out of the water – – we try to live only for our own interests.  We try to believe we are somehow better than other people.  We try to restrict, as we said last week, who we love, who we include, who we protect as a society.  We hurt the earth and other creatures who live on in.

As Paul points out, baptism is where we rehearse a life and death decision – – a decision by God to conquer death and bring us to life.  Why should we bother to try to live outside of this expansive view of life?

We have no reason to live in a manner that looks out only for ourselves – – God is looking out for us.

We have no reason to live in a way that puts others below us – – Jesus came in the form of a servant and calls us to be servants.

We have no reason, as I said last week, to deny love to anyone – – God has chosen to love all beyond our reason our judgment.

We have no reason to live in a way that destroys the earth and strains creation – – The earth has been blessed and made holy by the very Word and presence of God in it.

God has made a life and death decision and daily invites us to walk out of the tomb of sin and death and into the newness of life made holy.  Why wouldn’t we want to join it?

[2] This “historical fable” has been retold in numerous sermons and devotional materials.