Three weeks ago I discovered the digital comic strip of artist Yao Xiao. A China-born illustrator now based in New York City, Yao Xiao’s artwork delves into human emotions, identity, and friendships.  Her lesson in a 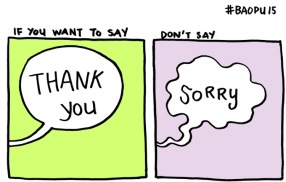 particular comic strip, Baopu #15, touched me deeply as she highlighted the tendency some of us have to say “I’m sorry” when what we really mean to
say is “Thank you.”

Some of the examples include :

The final thought stood out to me.  “Don’t apologize for simply existing.  Because it is not wrong.”

This form of communication – the apology in place of thanksgiving – stands out to me to be particularly common among populations that are taught politeness is important, gushing is unseemly, and humility is to be honored.  Not necessarily bad things individually, but when put together they can add up to the silencing of a voice, the devaluing of the individual, the underestimation of one’s worth.  Women especially are taught, whether explicitly or implicitly, that bringing ourselves down is a good way to lift others up.  Unfortunately we are socialized to apologize for ourselves rather than own our needs and emotions and desires as worthy of acceptance.

A somewhat controversial article was published both by LinkedIn and Business Insider this summer that addresses this same sort of convention from a different linguistic angle.  Ellen Petry Leanse, a former executive at both Apple and Google, wrote about one word that she non-scientifically observed women using more than man that she thought was damaging their credibility.  That word? Just.  That’s all.  Just “just.”  As in “I just wanted to check in on…” or “Just wondering if you’d decided between….”or “I’m just following up on…”  Can you hear it?  Are you mentally analyzing your email or phone message communications for the last week?  You can bet I am!  Leanse wrote:

It hit me that there was something about the word I didn’t like. It was a “permission” word, in a way — a warm-up to a request, an apology for interrupting, a shy knock on a door before asking “Can I get something I need from you?”

…I am all about respectful communication. Yet I began to notice that just wasn’t about being polite: It was a subtle message of subordination, of deference.

Putting these two pieces together – -the comic strip and the commentary on “just” usage – – I started to think about how dismissive we can be about ourselves.  How quick we are to assume that whatever we are, whatever gifts we bring to the table, we aren’t or they aren’t enough. In the church and life of discipleship it sounds like this: “Oh, I don’t think I can be a leader.  I’m just a member.”  Or “I’m not sure I can make a difference.  I’m just one person.”  “It doesn’t matter what I say in the world.  I’m just one Christian.” “My offering won’t help.  It’s just a few dollars.”  It’s like we dismiss what we have, what we are, before we even get around to sharing it.  We apologize for what doesn’t seem like enough instead of responding with gratitude at the opportunity to serve.

Although she would have had just about every socially acceptable reason to use such a “just” when the angel Gabriel came calling, Mary seems to have read Leanse’s article even at her young age.  OK, so probably not, but consider how this all went down.  Mary has absolutely no pedigree.  Luke likely would have given it to us if she did because, while it isn’t necessarily evident in the portion I read today, Luke knows his stuff.  He knows who the important people are in the news.  Early in the chapter he kicked off the telling of the birth of John the Baptist by setting the stage politically – -“In the days of King Herod of Judea.”  He doesn’t hesitate to give the resume of Zechariah, the father of John, a priest of the order of Abijah.  In the next chapter when Mary’ son is born we get the summary from the political section of the daily edition of the Jerusalem Times – “In those days a decree went out from Emperor Augustus that all the world should be registered.  This was the first registration and was taken while Quirinius was governor of Syria.”

No, if Mary had any connection to anyone of importance I’m sure it would have been mentioned, but it wasn’t.  She’s just a young girl from the backwoods of Galilee, a place you’ve never heard of called Nazareth, engaged to a man named Joseph.  She’s just an ordinary girl.  She comes as close to saying that herself as she possibly can without actually letting the words slip out. 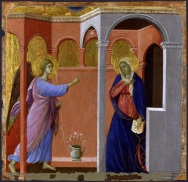 “Greetings, favored one!  The Lord is with you,” the angel says.  “Perplexed” is Mary’s response.  She pondered what he could possibly mean.  “Favored? The Lord… with me? What is this guy thinking?”  She gives him the floor to explain himself, which he does, only it doesn’t seem to make any more sense, “You will conceive… bear a son… name him Jesus.  He will be great… the throne of his ancestor David… He will reign… and of his kingdom there will be no end.”  There are numerous problems Mary could take up with this news, but she starts with the most obvious, “How can this be, since I am a virgin?”

How could she possibly be a part of this harebrained scheme of which Gabriel speaks?  She’s simply engaged, not married.  She’s not even from the line of David, although her betrothed is.  You can almost hear the thoughts churning in her mind as the angel keeps on talking, “He must have the wrong girl. This couldn’t be me.  I’m a servant, not a saint.  It doesn’t make any sense at all.”  Son of the Most High?  The Holy Spirit? The child to be born will be holy? Son of God???

The “justs” could have been endless, but when she opens her mouth to answer the call something completely different comes out.  “Here am I, the servant of the Lord; let it be with me according to your word.”  There’s no “just” in her response.  She knows she isn’t much in the eyes of the world.  She knows she doesn’t have a political or social leg to stand on, not before she was pregnant out of marriage, and most certainly not after.  She knows it all, and still she says, “Here I am.  Let it be.”

This is the lesson and blessing that has been unfolding all of Advent.  It’s the promise that we are right on the cusp of celebrating.  There is no “just” in God’s call, in God’s advent, God’s coming to earth.  There are no apologies to make; there is no permission to seek.  God knew who Mary was and who she wasn’t, when God came calling in Nazareth.  And instead of passing her by for someone more qualified, more respected, God chose her anyway. There’s no waiting until the timing is just right.  There’s no need for perfection and sinlessness.  There’s no need to worry that we are too ordinary or ill-equipped for God’s call, because nothing is ordinary anymore now that God comes to earth.  Instead, the ordinary is made holy.

I discovered a beautiful, simple song a few weeks ago that I have been waiting to share with you.  The singer-songwriter Malcolm Gordon wrote it with his young son Sam to remind us of this message – When God is here, there is no such thing as ordinary.

Friends! People of God! Heaven’s coming close enough to touch.  God’s love is coming here through us. Let it be so.